What are Chlorofluorocarbons (CFCs)?

Chlorofluorocarbons are a family of halocarbons that contain only carbon, chlorine and fluorine. An important subclass are hydrochlorofluorocarbons (HCFCs) that carry hydrogen as well. They served as brief replacements for CFCs.

CFCs and HCFCs are usually produced by halogen exchange starting from chlorinated methanes and ethanes. The brominated derivatives are generated by free-radical reactions of the chlorofluorocarbons, replacing C-H bonds with C-Br bonds.

The most common CFCs are small molecules containing only one or two carbon atoms. For example, a common refrigerant has the chemical formula of CCl 2 F 2 , more often rendered CFC-12.

•       ‘Chlorofluorocarbons (CFCs): when derived from methane and ethane these compounds have the formulae CClmF4-m and C2ClmF6-m, where m is nonzero.

•       Hydrochlorofluorocarbons (HCFCs): when derived from methane and ethane these compounds have the formulae CClmFnH4-m-n and C2ClxFyH6-x-y, where m, n, x, and y are nonzero.

•       Hydrofluorocarbons (HFCs): when derived from methane, ethane, propane, and butane, these compounds have the respective formulae CFmH4-m, C2FmH6-m, C3FmH8-m, and C4FmH10-m, where m is nonzero.’ (Wikipedia)

The Belgian scientist Frédéric Swarts pioneered the synthesis of CFCs in the 1890s.

CFC vapour pressures and heats of vapourisation made them very suitable for refrigeration applications. The initial development of CFCs in the late 1920s and early 1930s stemmed from the call for safer alternatives to the sulfur dioxide and ammonia refrigerants used at the time. CFCs were first produced commercially by DuPont in the 1930s.

‘During World War II, various chloroalkanes were in standard use in military aircraft, although these early halons (eventually banned in 1994) suffered from excessive toxicity. Nevertheless, after the war they slowly became more common in civil aviation as well. In the 1960s, fluoroalkanes and bromofluoroalkanes became available and were quickly recognized as being highly effective fire-fighting materials.’ (Wikipedia)

‘By the early 1980s, bromofluoroalkanes were in common use on aircraft, ships, and large vehicles as well as in computer facilities and galleries. However, concern was beginning to be expressed about the impact of chloroalkanes and bromoalkanes on the ozone layer.’ (Wikipedia)

CFCs and the environment

By the 1970s, scientists were predicting that CFCs could be the cause of ozone depletion in the upper atmosphere and this was confirmed by satellite observation. 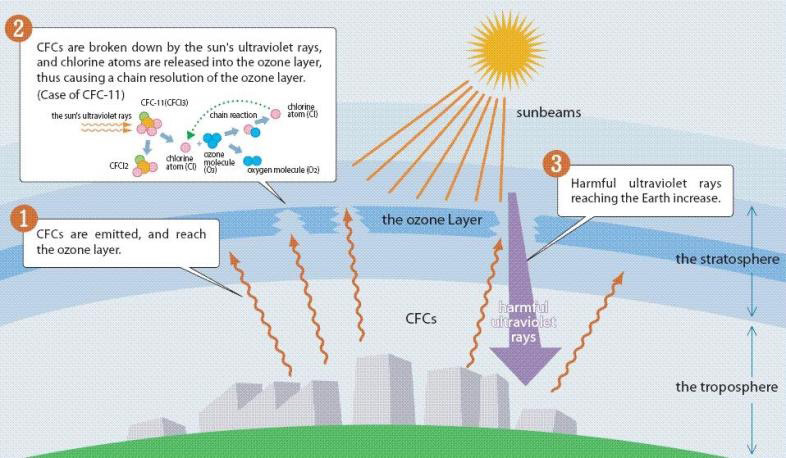 Very little chlorine exists naturally in the atmosphere – but CFCs are an efficient way of introducing it into the ozone layer. Ultraviolet (UV) radiation, at the ozone stratospheric height of between 20 to 30 kilometres (12 to 19 mi) above Earth, breaks down the CFC and releases the chlorine.

Under particular conditions, the chlorine can destroy large amounts of ozone. Such conditions have repeatedly occurred over the Antarctic causing the ‘Hole in the ozone layer’. Consequently the Earth’s surface is exposed to genetically harmful radiation. 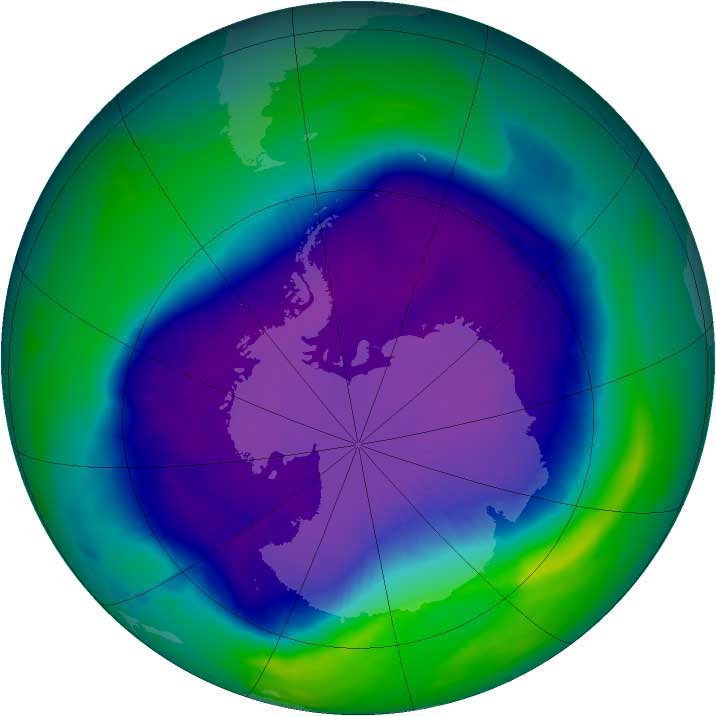 CFCs have an atmospheric lifetime of 20 – 100 years. One free chlorine atom from a CFC molecule can destroy large amounts of ozone molecules over that time – and will continue to do so for well into this century.

In a milestone of international co-operation, governments gathered in Canada in 1987 as fear of continued depletion of the ozone layer mounted up. The result was the Montreal Protocol that called for significant reductions in the production of CFCs. Subsequently CFCs were banned in the EU and in all other developed countries. Although pockets of production continue to exist, general prohibition is likely to eliminate CFCs shortly.

Thanks to their perceived reduced potential to exercise ozone damage, CFCs were quickly replaced by HCFCs. HCFCs are less stable in the lower atmosphere, enabling them to break down before reaching the ozone layer. Nevertheless, a significant amount hydrochlorofluorocarbons reached the stratosphere to release more chlorine than predicted. HCFCs are scheduled to be phased-out by 2015.

HFCs are organofluorine compounds that contain hydrogen, carbon and fluorine. Importantly they do not contain chlorine and therefore do not have any potential for the destruction of ozone. They are however a potent global warming gas – though in small controllable quantities. Nonetheless atmospheric concentrations are increasing, causing some international concern. 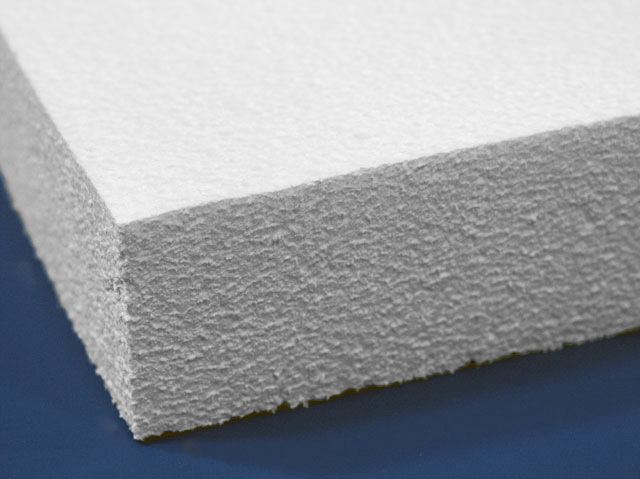 Pentane is an organic compound with the formula C5H12. It is an alkane with five carbon atoms.. Pentane, occurring naturally, is a component of petrol fuel for vehicles. It is also used as a solvent and as a precursor in production of other chemicals.

In construction pentanes (iso-pentane, cyclopentane, n-pentane); are some of the primary blowing agents used in the production of polymer insulation foams.

The most well-known of the greenhouse gases is, nonetheless, used occasionally as an insulation blowing agent – though its relatively high thermal diffusivity means that the foam made with CO2 is a relatively poor insulator.