This article looks at the question of the embodied carbon in insulation. We assume that the U value is fixed and the thickness of the wall is variable. Also at the moment we are only considering embodied carbon and not cost.

So what we are talking about is a functional unit of one m2 of wall with a given U value (of 0.15 W/m2K in this case). The boundary condition assumed is that the rest of the wall structure remains the same in all cases. You can consider it as an externally insulated solid wall construction with external cladding and an uninsulated U value of 1.25 W/m2K. Thermal bridging and the effects of framing required for non-rigid insulation are ignored for the time being.

The thickness required (first graph) is a function of the thermal conductivity of the insulating material. Some materials such as polyurethane (PUR) have conductivity as low as 0.23 W/mK, while most materials cluster in the mid-range at around 0.40 W/mK. 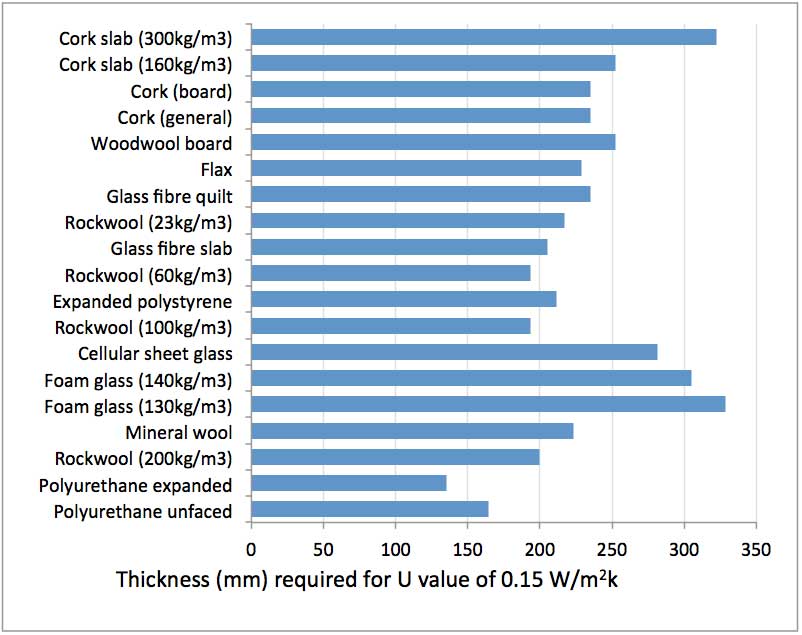 The data used for this assessment is drawn mainly from the Inventory of Carbon and Energy v2.0. There were a few gaps which had to be filled using information at GreenSpec.

The results of this (second graph) show a massive difference between the low embodied carbon materials and the high. And remember they are all saving the same amount of carbon over their lifespan as they are all based on achieving the same U value. This means that the carbon return on carbon invested (CROCI) of the glass fibre quilt will be 46 times higher than that of the unfaced PUR insulation. There are other things to consider here, not least cost, but we’ll come back to that. 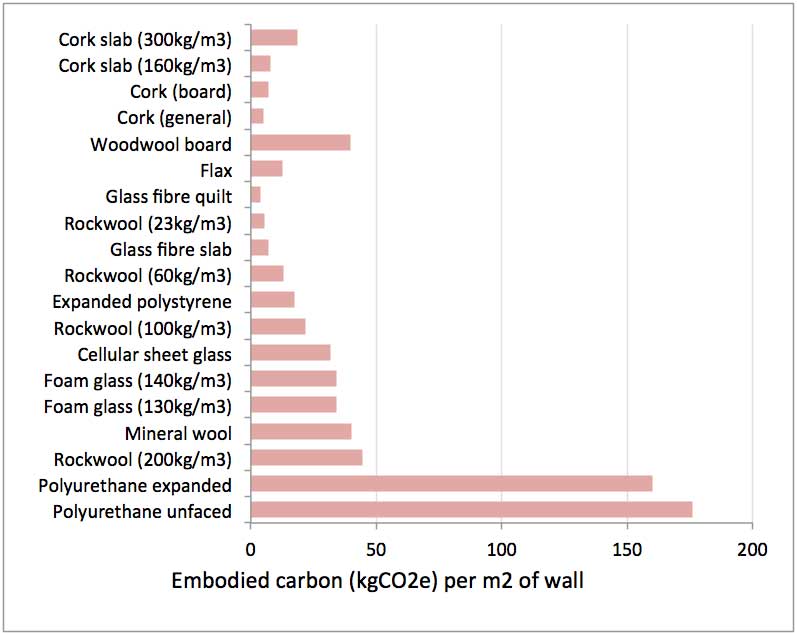 First I want to look at sequestered carbon. Advocates of natural building materials will tell you all about the carbon that is locked up in natural building materials. In fact by weight timber is generally 50% carbon which means 500g of carbon sequestered per kg of wood. Converting that to carbon dioxide you get a figure of 1.83 kg of CO2 removed from the atmosphere for every kg of wood products used [1].

Now there is some debate as to how that sequestered carbon should be treated. Some say that the whole benefit should be given to the building product. Others say that as you can’t be sure what will happen at the end of the building’s life the credit shouldn’t be counted at all [2]. I’m going to sit on the fence on this for the time being and just show you the graph with the two figures on either side of the y axis (third graph). 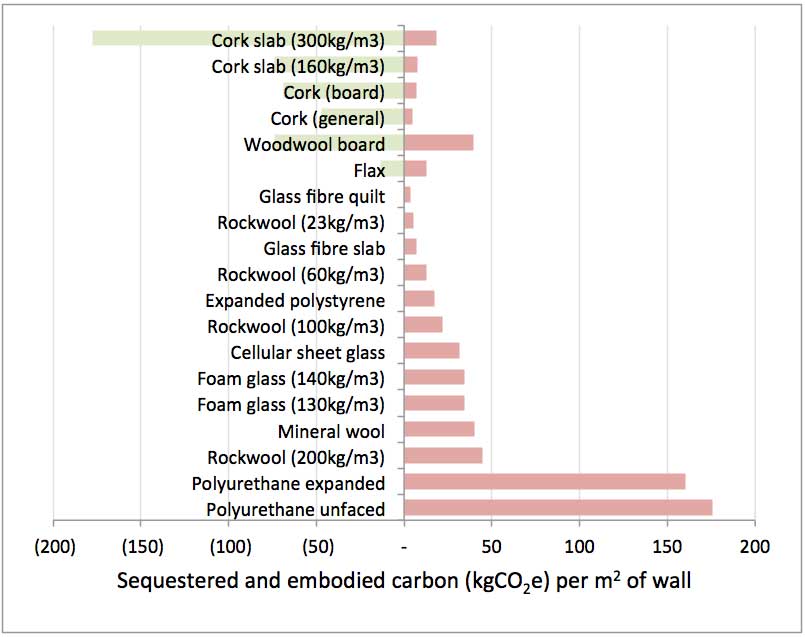 As I said, there are other things to consider.

Space: As we’ve seen, this depends on the conductivity. The big jump is for PUR-type insulation where the space saving is high. In places where space is at a premium, such as retrofitting internal insulation this can be a major factor in favour of using high embodied carbon insulation.

Structural properties: Some of the insulation products in the graphs above have structural properties that add to their value. The more rigid materials can have cladding hung from or fixed to them directly, avoiding the costs of framing and reducing thermal bridging.

So is it worth specifying natural insulation materials? Going back to the way I approached my thesis question (what are the optimal points for carbon and money when installing insulation?), including sequestered carbon would have suggested that the carbon-optimal U value is that of an infinitely thick wall! However the financial-optimal point would have been at a higher U value than for most non-natural materials.

If you can achieve the same performance in the same space for the same cost with the natural material, then the answer is simple. In optimisation theory the natural insulation would be a “dominant option”. But this won’t often be the case. More often there will be options which are better on some measures and worse on others meaning you have to trade off the value you place on things like capital cost, running cost, environmental impact and space.

There are few easy answers when it comes to questions with that many parameters. But now at least you have graphs to approach some of the question.

[2] For example the wood could be burned to generate energy after it is removed from the building – in which case you need to estimate what the carbon footprint of the displaced fuel will be by the time the building is demolished. It could just rot, adding methane to the atmosphere. It could be made into compost and displace peat that might otherwise have been dug u