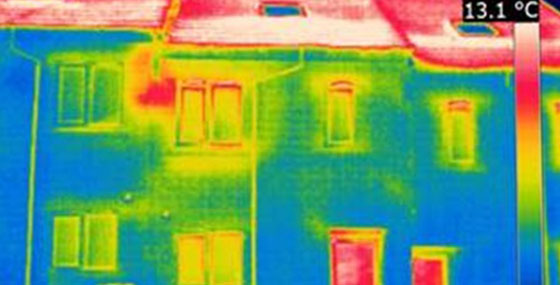 The Government's legally binding objective of achieving an 80% reduction in national CO2 emissions and the drive for zero carbon homes and buildings is focusing attention upon building design and procurement. The needs for systemic change is increasingly recognised as there is mounting evidence to suggest that buildings that are being designed to achieve thermal performance standards, including the Building Regulations, are in fact consuming in excess of 40% more energy than the predicted values. In some cases the increase in energy consumption can be up to 70% greater than that predicted.

So why does this gap between calculated performance and reality exist? The principle reason for these failures in performance is not so much due to the materials that are being utilised but rather systematic failings in the regulatory calculation methods and the standards of design and workmanship.

What is Thermal Bypass?

Thermal bypass is heat transfer that bypasses the conductive or conductive-radiative heat transfer between two regions. Defined in this manner convective loops, which include both air infiltration and windwashing. In this context that it should be recognised that the term thermal bypass is being applied to largely unfamiliar, and often unregulated, heat transfer. Furthermore it is an acknowledgement that air movement can lead to a significant increase in the heat loss when compared to predicted values. This means that even when the architect, and builder, thinks that a design has addressed the performance requirement it is very likely that it has not.

In principal there are two forms of convective loop bypass that occur predominantly through natural convection. “Closed loop” convection may be observed where the air mass remains largely unchanged but temperature differences exist at the boundaries causing re-circulatory air flow whereby the air moves in a loop. A good example of this could be an unventilated cavity wall. “Open loop” convection allows an air mass to be replaced by other air and therefore includes air gaps that permit air flow, and thus heat transfer, between two regions. This form of heat loss is the result of failures in airtigthness and windtightness.

“Closed loop” convection can result in significant failures in thermal performance. In principle this is driven by stack effect. A range of studies have shown that even narrow air gaps between the (internal) air barrier and the insulation and small gaps in the joints between insulation have been shown to result in significant heat loss. The proportionate impact of the convection increases as the U-value is improved. An increase in heat loss of about 160% greater than the calculated U-value is not uncommon when air gaps exist behind the insulation.

In principle “Open loop” convection this is driven by the wind penetrating the thermal envelope. This form of heat loss can be addressed by airtigthness and windtightness. Airtightness may be defined as “the property of preventing air from penetrating through the shell” and windtightness as “the property preventing air from penetrating into the shell so that the thermal insulation property of the insulation material is not reduced.” In reality it is often found that both Open and Closed loop bypass can occur at the same time.

Windwashing can affect the thermal performance insulation, short-circuit the performance of insulating sheathing, and cool down an air barrier system located towards the outside of the wall assembly (potentially below the dew point temperature). Poor windtightness has been shown to result in catastrophic failures in thermal performance; one study examining as-built defects reports that the heat loss was increase by up to 660% beyond the U-value. Admittedly this is an extreme example it would appear that an increase of 40% may be more common where adequate windtightness is not achieved. Areas that are at particular risk to wind washing are eaves, gables, ridge and corners.

Airtightness is an umbrella term that is used to establish performance criteria that impacts upon thermal transmittance, dynamic thermal response, moisture tolerance, sound insulation, draft discomfort and energy consumption. Air flow through 300mm of insulation, with a velocity of 2.5m/s, would result in a 35% reduction in thermal performance. For this reason airtight construction is a prequisite and all joints, cracks and services penetrations through the air barrier should be sealed accordingly.

The air flow through a 1 mm wide one meter long joint, transports approximately 360 g water per day when there is a pressure difference of just 2 Pa, the stack effect occurring over two storeys. In the winter across the section of an insulated wall the temperature gradient falls towards the outside. 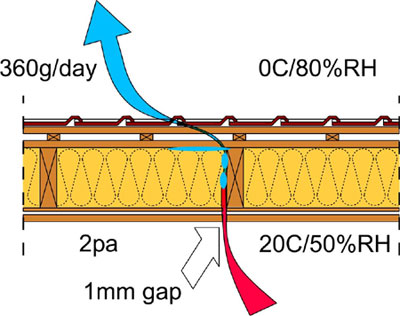 In the example given above, where there is poor airtightness and the temperature falls below the dew point, substantial condensation will occur which can lead to mould growth and the damage of timber. In contrast the quantity water vapour transported via diffusion is very small. Assuming suitable attention is given to vapour diffusion the greatest risk to moisture performance is poor airtightness.

The convention in England and Wales, supported by the Accredited Construction details, is to apply the air barrier internally. This has mean that convection at party walls between properties has been unaddressed. Part L now includes more detailed consideration for party walls. This reflects research by Leeds Metropolitan University (LMU) highlighting the fact that the heat loss from party walls effectively meant that a mid terrace unit performed like a detached house; this contrasts with the theory in previous editions of the Building Regulations that there was no heat loss from the party wall. The reason for the poor performance was that the cavity of the party wall permitted heat loss via convection. Based upon further studies by LMU a number of strategies are now considered within Part L. The first two approaches are considered to achieve a U-value of zero. The first method is to have a solid a party wall however careful consideration should be given to acoustics. The alternative is to fully fill the cavity with insulation. The final option is to provide a continuous seal within the cavity in line with the surrounding insulation – this is achieved by placing an insulated sock wrapped in polythene, but this less successful method achieves a U-value of 0.2 W/m2K. An unfilled and unsealed cavity will have a U-value of 0.5 W/m2K.

For buildings to perform as expected the ability for designers and non-designers (clerk of the works, constructors trades and) to recognise and avoid thermal bypass mechanisms is critical. If thermal bypass is to be addressed, and carbon reduction objectives are to be met, industry wide training needs to provided at a national level. Until then building failures will continue and a cost to both clients, government and the environment.

A more detailed account of Thermal Bypass can be read in a paper wrtiten by Mark and hosted at the AECB website. Link to the AECB

NOTE: This article was originally written when author worked at DEWJO'C Architects (which latterly became Devereux Architects). In 2011 Mark set up his own practice so that he could continue to pursue his interests in developing sustainable, low energy architecture.


About the author:
Mark Siddall, principle at low energy architectural practice LEAP, is an architect and energy consultant specialising in low energy and PassivHaus design. He was project architect for the Racecourse Passivhaus scheme and has a keen interest building performance. In addition to architectural services his practice provides project enabling and education for clients, design teams and constructors.