• Timber cladding is evident in Europe from at least the 'Dark Ages' , particularly in regions dominated by forest. 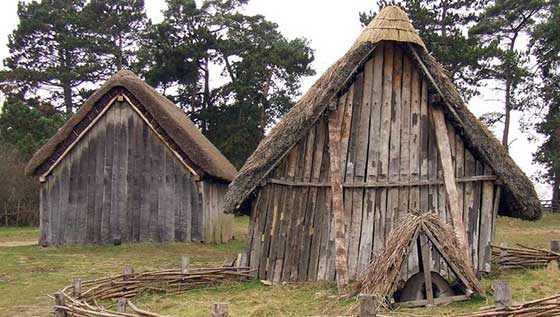 Reconstructed Anglo Saxon houses at West Stow. The Germanic tribes carried their construction techniques with them on their travels. Here planed timber is set upright on stone or wood cills.

• In the 'Modern' era, weatherboarding became common in the 16th century as it found its way as a superior cladding material – replacing as well as overcladding timber frame, wattle and daub.

• Weatherboarding continued to be popular in areas where timber was more easily available than brick. Softwood framed, timber-clad constructed buildings were unrivalled in terms of speed and economy of construction.

• Early weatherboards were ‘cleft’ or split from oak or elm. Such cladding is known as ‘clapboarding’ The name comes from the dutch ‘klappen’ meaning ‘to split’.

• The relatively short lengths and imprecise nature of clapboarding was eventually superceded in the late 18th century by industrially sawn softwood boards imported from initially the Baltic and later, as well, from North America. Industrialised timber production combined with such technologies as wire nails enabled timber frame construction complete with weatherboarding, to be a common choice in building – even in urban areas.

• Come the availability of cheap mass-produced brick transported anywhere in the country by rail, masonry construction became the Victorian route to providing mass housing to a newly industrialised urban workforce. By the 20th century, brick and other clay products had effectively eclipsed timber construction in all but small pockets of the UK where more traditional local materials and techniques resisted industrialisation.

A slum in Kensington approaching demolition in the 1860s. Note the combination of timber cladding and brickwork. As land became more expensive, particularly in the West End, new buildings built using brick, steel and concrete, outstripped these light-weight rural scale buildings in size and splendour.

• Modernism with its head well set in concrete, steel and glass, largely avoided timber cladding. The PoMo palette was even more restricted.

• Its difficult to say how timber cladding made its comeback, but a number of factors can be argued, including: a maturing of the modernist agenda, mavericks in the outfield who kept the faith, an emergence of the regional vernacular, the fashion gene looking for the next fix- but also it’s impossible not to acknowledge the pervasive undertow of environmentalism that most of the presentation generation of designers have grown-up with. Timber is seen as the most ‘natural’ of building materials and its use signifies at least a nod of recognition if not a complete embracing of sustainability.

• Nowhere was the dialectic between industrial and ‘natural’ materials rendered more dramatically than in the Finish pavilion at the Seville Expo of 1992. Designed by MONARK, the halves of the building facing each other across a 2m gap were radically different in their envelopes. One, the ‘Machine’, was clad in steel whilst the other, ‘Keel’, was clad in Finish pine. The tension was palpable and exciting.

• Peter Wilson of Napier University cites David Chipperfield’s Henley Rowing museum of 1997 as a prime source of the renaissance of timber cladding in the UK.

• Doubtless we’re somewhere around the peak of timber cladding’s modern popularity. Even mass house-builders have chucked timber into their irreverent pallets of finishes to satiate the needs of their touchy feely eco-aware customers. 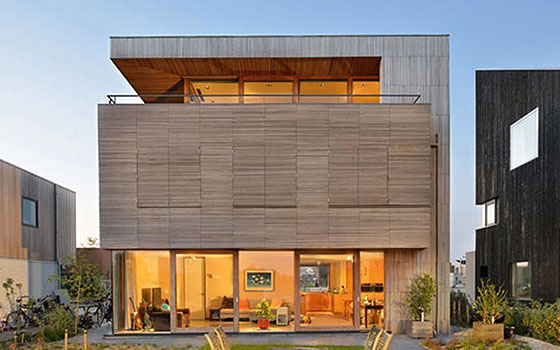 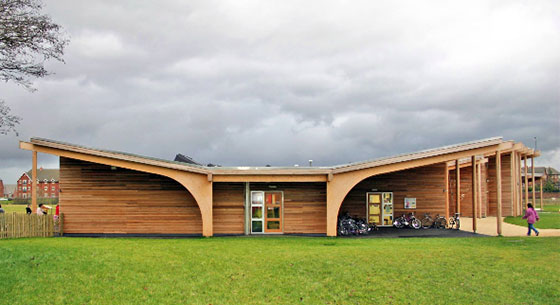