Of all renewable energies, wind power holds the most promise to make a significant impact on reducing carbon output. The UK is the windiest area of Europe. Commercial windpower, produced by turbines rated at between 1 – 2.5 MW, currently accounts for around 5 GW onshore and 2.5 GW offshore capacity in the UK (2012). The Sustainable Development Commission further estimates that a combination of onshore and offshore generation could theoretically produce a ‘practical’ maximum of 150,000 gigawatt hours. This figure is just less than half the 345,000 gigawatt hours consumed in the UK in 2005.

Whereas the dynamics of wind power generation are reasonably transparent at the large commercial scale, the same cannot be said for the domestic scale. The current market is marked by turbine performance claims and counter-claims. Most of the take-up of this generation of turbines has been from urban householders keen to cut their electricity bills and/or to do their ‘bit’ for climate change. The sad fact is that for many their first experience of ‘micro generation’ has been anything but happy with actual performances often dramatically undershooting expectations.

If used appropriately, domestic wind turbines can generate useful electricity that would otherwise be drawn from the grid - thus reducing the carbon footprint.

The scheme of feed-in tariffs, designed to promote the take-up of domestic-scale generation, and introduced by the government in 2010, is likely to prove popular with those households and communities who can invest the necessary capital into small wind energy schemes.

For the majority of property owners living in urban areas, installing wind turbines on or close to buildings with overall windspeeds of less than 5m/s is probably not a realistic proposition. Electricity generation will be disappointing and pay-back periods are likely to recede into the distant future. 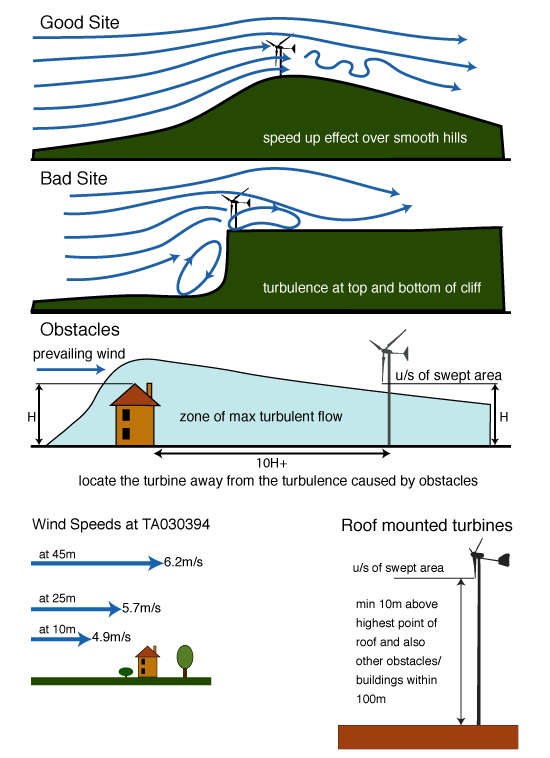 1 Quantity of wind at hub height

• Overall windspeeds for a particular site can be found here at the BERR wind data site. Note that these speeds are an overall average for the area. Particular sites can vary according to local topography.

• For windspeeds used to calculate wind turbine output for use in the Code for Sustainable Homes, specifiers should use a standard of calculation developed for the Microgeneration Certification Scheme. Guidance can be found in document MIS3003 - accessed via the Green Book website and clicking on 'Information for installers'.

• Frequency Distribution: The number of hours that the wind blows at different speeds. This distribution will be different for each site. When calculating output a mathematical function known as the ‘Raleigh Distribution’ is used (The Raleigh distribution is a special case of the Weibull distribution which is commonly used for approximating the wind speed probability distribution.

• When designing for an obstacle-rich environment, the height of the obstacles effectively represents ground level for wind speed calculations.

• Obstacles cause turbulence. Turbulence reduces the efficiency of a turbine.

• Ensure that the turbine is set at a height above ground level to avoid turbulence.

• When finely calculating turbine output the nature of the landscape over which the wind travels is considered. This is known as ‘Roughness’. It is rated in terms of class with values from 0 to 4 where the sea’s surface is ‘0’ and a landscape with many trees and buildings is ‘4’.

3 Losses due to yaw

• Consider the site’s proclivity to wind gusting. Conventional turbines need to turn into the wind to function. Gusts of wind can move a turbine (yaw) erratically around its axis but do little to generate power. Worse, they can seriously contribute to mechanical failure.

4 Swept area of the rota

• The swept area of the rota determines the energy capture of the turbine.
• note that the area is not necessarily linked to the size of the generator – the generator cannot generate more power than the rotor can capture. This should be considered when examining manufacturers’ output claims.

5 The efficiency of the blade design

• The maximum efficiency of a turbine in capturing energy from the wind is determined by Betz’ Law. The law states that a design can only convert a maximum of 59% of the kinetic energy in the wind to mechanical energy.

• The efficiency of the turbine is determined by the design of the rotor blade. In practice the maximum efficiency obtainable at optimal rotation speed (the aerodynamic power coefficient) is nearer 35% (or 0.35) with efficiency dropping off either side of that speed.

6 Efficiency of the generator

• The generator’s resistance to the rotor implies that the rotor will only start spinning at a certain speed, this is known as the ‘cut in’ speed and is usually much lower than the optimal speed at which most power is generated.

• Energy is always lost through transmission (a fact well-known about the national grid).

• Cabling should be carefully specified and designed to minimise losses over distance.

• Turbines connected to batteries energy a voltage regulator is used to prevent overcharging. Energy is lost both in this process and that of exporting the DC supply through an inverter for domestic AC use.

• Likewise turbines that are grid connected require the energy to pass through a grid controller, an isolator and then to a synchronous inverter – all leading to a reduction in energy delivered. 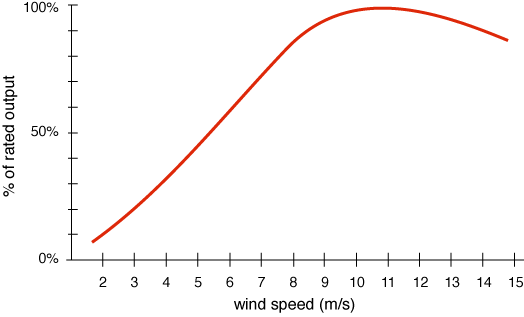 To determine the likely output of any one turbine, a ‘Power Curve’ is used

Methods of calculating the power output

A: Using the DWIA calculator

• For accurately determining the likely output from a turbine use the Danish Wind Industry Association’s power calculator (http://xn--drmstrre-64ad.dk/wp-content/wind/miller/windpower%20web/en/tour/wres/pow/index.htm). The calculator works by combining the turbine’s power curve (above) with the distribution of wind speeds at a particular site (the Weibull curve, above). The calculation provides a prediction of the average power output.

• Multiplying the average output by the number of hours in the year (8,766) will give the total energy output for an average year.

B: Using the power output equation

• CPoa is the aerodynamic power coefficient (efficiency of the rotor to convert energy)
• A is the swept area of the blade
• PA is the power density of the wind = 0.6125 x S^3 where S is the wind speed in m/s
• G is the generator efficiency

• The turbine manufacturers rate their turbines as providing a certain output at a given wind speed. Some rating definitions are those wind speeds providing maximum output whilst others are less than maximum outputs at different wind speeds. There is no industry standard.

• The rating for a turbine is unlikely to be an indication of its actual energy production.

Checking the claimed output rating against the likely efficiency

We know from the above that the maximum practical efficiency is around 35%. Most turbines work at efficiencies of between 22% - 31% at 10m/s and between 17% - 26% at speeds of 12m/s. If we take the manufacturers output rating for a given wind speed and insert it into the above output equation and calculate the assumed efficiency, we can judge the manufacturer’s claim.

38% is a long way off from the circa 26% max. expected from others at the same wind speed!

By calculating the annual expected actual output from a wind turbine, it is then but a short step to be able to determine the likely percentage of household electricity consumption that the turbine will provide.

Taking the above example of a 1.75m diameter turbine. We have calculated, given generous parameters, that the turbine could be expected to provide around 966 kWhrs/pa at an average overall windspeed of 5m/s. Let us assume that the annual domestic consumption is around 5,000 kWhrs/pa. Then the % of annual consumption to be reasonably achieved would be:
966/5000 x 100 = 19%

This can be easily compared with the manufacturer’s claim.

Taking the above example of a 1.75m diameter turbine generating a realistic 966 kWhrs/pa at an average wind speed of 5m/s and given the current cost of electricity at around 12 pence per kWh the payback time would be calculated as follows:

21 years might be close to or exceed the life expectancy of the turbine.

• However, it should be noted that this calculation is based on current purchase and installation costs along with current electricity prices.
- Higher average wind speeds would reduce the pay back period.
- In the near future unit costs are expected to reduce and electricity costs are likely to rise.

• Footage of a typical 1kW wind turbine along with its larger cousins in a windy location.

Typical components of a larger turbine