• ‘Biomass’ refers to a fuel that is produced by organic means.

• It is very nearly ‘carbon neutral’, limited by the need to transport the fuel.

The central principle of biomass is that it takes carbon out of the atmosphere during growth and returns it when burnt.

A ‘closed carbon cycle’ is maintained where the biomass is harvested as part of a constantly replenished crop. Harvesting is followed by replanting, with the new growth taking up the C02 from the atmosphere released by the combustion of the previous harvest.

At the grid scale the Government is using the Renewable Obligation scheme to promote the development of large-scale integrated biomass generation. Because of the ease and low-risk of retrofitting fossil-fuel power plants to enable ‘co-firing’ (where both fossil and biomass fuels are used together), most of the initial expansion was in the area of existing power stations; But as the production and delivery of biomass at an industrial scale has become more refined, we are starting to witness a growth of the dedicated biomass power plant.

• The Eccenshall plant near Stafford generates 2.65 MW of electricity, enough to power some 2,000 households. The fuel is Miscanthus (an SRC, see below) grown within a 25 mile radius. The ash residue will be used as fertiliser on local farms.

• The world’s largest biomass power plant is being planned at Port Talbot. The 350MW station will be wood-burning with fuel being imported from sustainable sources in North America.

• Short-rotation coppice (SRC): Fast growing trees that provide the bulk of fuel being currently used. SRC can be used alongside coal in co-firing power plants.

• Wood waste: The waste from forest maintenance, other timber industries and other crop residues is commonly transformed into compact fuel pellets.

• Municipal solid waste: An increasing amount of waste previously destined to landfill is being used to generate both heat and power on a municipal scale.

Biomass district energy systems are those that feed energy from a centralised location to a number of units eg flats, houses, offices, industrial units. Heat generated centrally is piped to each building where it feeds a heat exchanger. Likewise, electricity generated in a CHP process is fed to each building as required.

District heating and power systems are common in Europe. The UK is only beginning to progress from a long-term base of around 1% of heating provided by district heating systems, compared with, say, Denmark (60%) or even Germany (12%). But with the drive towards CO2 reduction and the development of boiler technologies, along with more secure fuel planning, district heating systems are becoming increasingly viable and popular. CHP systems on the other-hand are still in the early-days of development – though they offer much promise, experience of early systems, such as that at BedZED have been disappointing.

Heating systems are an established and tested technology in Europe

No individual fuel storage is required

Houses / premises can be individually metered

CHP plant has the potential to save 25% of energy, compared to the separate generation of heat and electricity

Setting up agreements for multiple private customers can be complex

Boilers are large and expensive

Around 10% of heat can be lost in distribution

CHP systems are still being developed. It is not yet a reliable technology 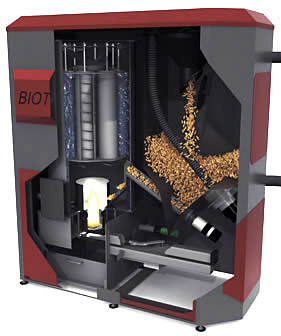 Biomass is beginning to compete in the domestic market alongside gas and oil as a fuel. Most boilers are imported from Austria where currently 80% of all boilers installed are wood pellet boilers. More costly than wood chip fuel boilers, wood pellet boilers are more like conventional boilers including self-igniting and self-regulating. They are also more efficient, typically burning at up to 94% efficiency. As the technology develops, domestic-scale CHP boilers are also likely to feature on the market in the future.

Heating systems are an established and tested technology in Europe

Ideal for where mains gas is unavailable

Can accommodate a range of fuels

Fuel storage and feed to the boiler are an extra demand

Feed supply blockages to the boiler can be common

Fuel costs are variable - dependent on source, distance from supplier and quantity purchased

• More suitable for medium / large scale operations
• A local supplier is needed
• Quality tends to be variable
• Fuel reception design is key and can be expensive
• Fuel does not flow and is difficult to handle.
• Care should be taken when using recycled wood because of the risk of contaminates such as formica or melamine, plastics and paint.

• More suitable for small / medium scale operations
• The fuel is usually made from compressed sawdust and wood shavings but can be made from most biomass material (eg straw, forestry residues and specially grown energy crops)
• Pellets are usually produced at an industrial scale, though developing technology is enabling smaller-scale production.
• There isn't' t yet a consistent quality of pellet in the UK. Pellets vary according to source. Care should be taken when using recycled wood because of the risk of contaminates.
• Pellets are more expensive than wood chip / logs.
• Sources are unlikely to be local – necessitating transportation over long distances – so adding to cost and carbon emissions.
• Fuel is delivered by blower – fuel storage is generally simpler and cheaper than for other wood fuels.
• Unlike other wood fuels, pellets ‘flow’ – resulting in simple delivery to combustion.
• Pellet quality is crucial – boilers can be ‘intolerant’ to certain sources.

• More suitable for small operations
• Logs are easy to handle.
• Logs are more often sourced from a known and existing supply chain.
• They can be produced from small scale woodland
• They need to be loaded manually at least once a day