• A ‘Sunspace’ is a south-facing glazed area located outside of the main fabric envelope of the building.

• The addition of a sunspace can realise significant gains in energy efficiency. This can amount to around 30% when compared with a direct gain equivalent (1), though this varies according to climate and latitude where buildings benefit from southern locations.

• In terms of design, whereas it is possible and profitable to use ‘lean-to’ sunspaces for thermal buffering to all heated accommodation, in practice most designs are limited to buffering the main living areas.

PCMs are solidified inside spheres (commonly 75mm diam.) or cylinders stored in tanks. The PCM material is selected to change phase (melting and freezing) at specific temperatures suitable for space heating.
Compared with crushed rock, the sizing requirements are reduced by typically 90%. 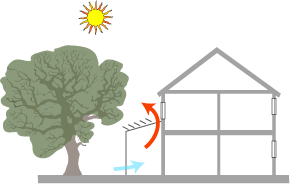 Sunspaces are easily overheated in summer. The problem can be resolved by:

1 Shading from the sun.
- External solar shading from a roof overhang or adjacent louvers.
- Deciduous trees (beware though that leafless trees will, to an extent, continue to shade.)

2 Ventilating the sunspace by placing operable vents to the exterior through the roof of the sunspace. These can be automatically opened and should be coupled with vents at low level to enhance the ‘stack effect’.

• Air tightness around windows and doors should be particularly effective to reduce heat loss to the sunspace when that space cools to temperatures lower than the adjoining living area.

• If automatic vent operation is not provided, the building user needs to be fully aware of the need to control the vents correctly.

• Where automatic controls are provided, users should be able to set them for desired levels of comfort.

Thermal mass within the sunspace

• Unless where storage walls are used, the house wall to the conservatory should be of the same thermal performance as for other wall elements of the building envelope.

• Sunspace glazing should be at least double-glazed. o If roof glazing is included it should be shaded at times of peak solar radiation

• For maximum performance, flanking walls should be considered to the sunspace.

• Sunspaces are particularly sensitive to user misuse. When used correctly, sunspaces will make a significant contribution to energy conservation. However, when used inappropriately, they can equally increase energy inefficiency.

• It is imperative to inform users of the role of sunspaces. For example, anecdotal evidence relates that there are occasions where sunspaces prove to be so popular that users annex them into their living spaces - complete with carpets and electric fan heaters. The more 'room-sized' the space, the more likely it is to be adopted as permanent (rather than occasional) extra living area.

• In response, some designers deliberately design sunspaces with minimum floor space to deter their use as extra rooms.

• When undertaking predictive modelling, it might be considered wise to factor for a degree of 'irrational' behaviour with regards to the use of sunspaces.

(3) The most common example of this phenomenon is the melting of ice to form liquid water-a great deal of energy is absorbed by ice at 0ºC to transform it to water, also at 0ºC. Conversely, an equally large amount of heat is released from water to form ice (i.e. freezing) at this same temperature.