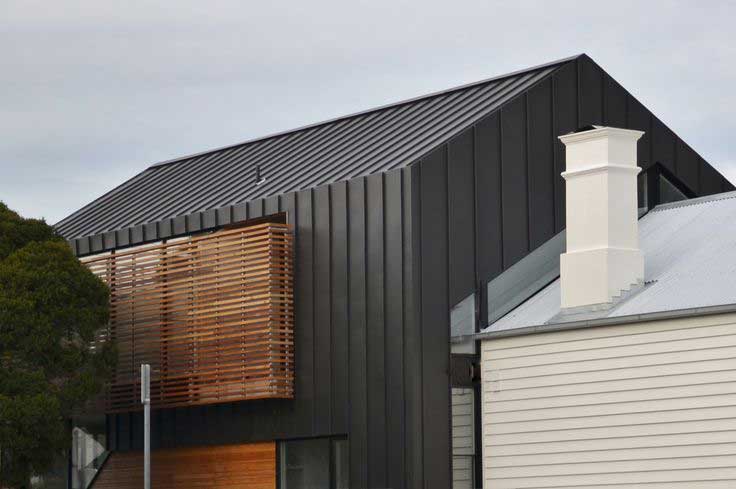 • Zinc, (aka spelter), is an element with symbol Zn and atomic number 30.

• Zinc was known from ancient times, when Brass (i.e. an alloy of Copper and Zinc) was used.

• Zinc is a good conductor of heat and electricity

• Zinc has strong anti-corrosive properties and bonds well with other metals. 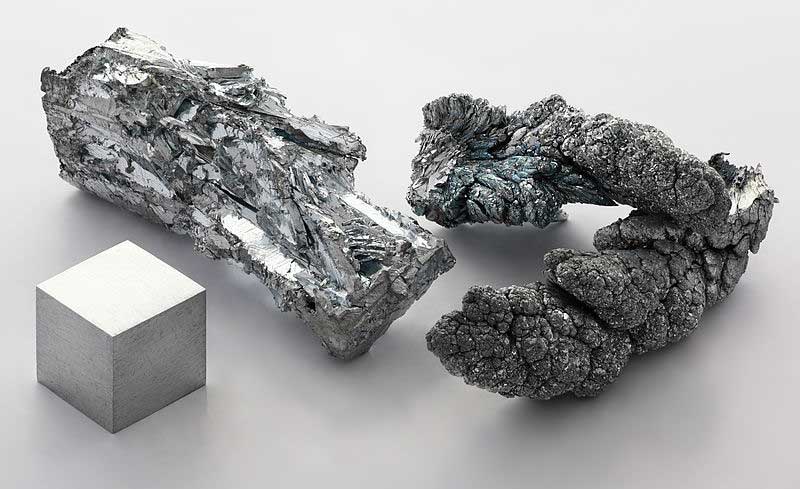 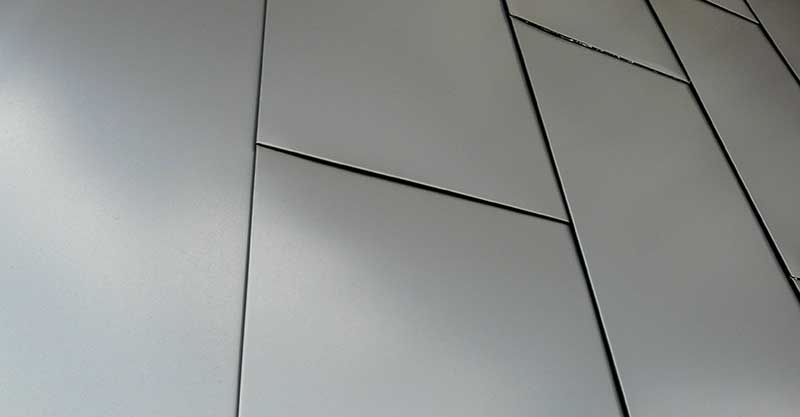 • Zinc-coated metal was first patented in 1837.

• The process of galvanizing iron sheets, involves the ‘hot-dipping’ of the sheets to protect against corrosion. Around 50% of zinc that is produced is used in galvanizing.

• Construction uses at least two thirds of all coated steel strip produced, mainly for roofing and cladding. Much of this material has a mill-applied organic coating on top of the zinc creating ‘colour coated’ steel.

• Modern titanium zinc roofing is an alloy of high-grade zinc of 99.995 percent purity combined with traces of titanium to reduce coefficient of thermal expansion and improve tensile strength and hardness. The addition of copper improves workability

• Architectural grade zinc is 90 to 95% recycled. Replacement costs are negligible with a long lifetime of 80 to 100 years for zinc roofing and 200 to 300 years for wall systems. This long-life durability is a key component in durability. At the end of its service life, zinc products can be recycled indefinitely without loss to chemical or physical properties. (Wikipedia)

Mining resources are estimated at a level of 220 million tons of currently exploitable zinc ore reserves. Annual world consumption of zinc is at present 9.7 million tons. Since recycling accounts for about 39% of zinc consumption, zinc reserves are depleted at a yearly rate of 5.9 million tons.

Increased recycling will compensate for future growth in consumption. On the basis of constant consumption and without assuming future exploration successes, existing exploitable zinc ore reserves will last for a period of about 55 years. (source VM Zinc)

Zinc occurs only in a combined state. The dominant zinc ores found in the earth’s crust is zinc blende (zinc sulphide or spharelite) ZnS, calamine ZnCO3 and Zincite, Zno.

Zinc is commonly found in mineral deposits along with other base metals, such as copper and lead. Zinc deposits are broadly classified on the basis of how they are formed. Zinc is produced mainly from three types of deposits: sedimentary exhalative (Sedex), Mississippi Valley type (MVT), and volcanogenic massive sulfide (VMS).

The main countries where zinc ore is mined. 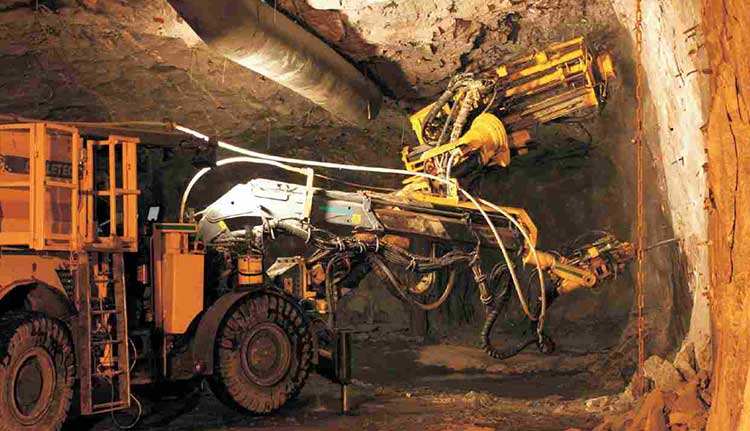 Over 95% of the world’s zinc is produced from zinc blende (ZnS). 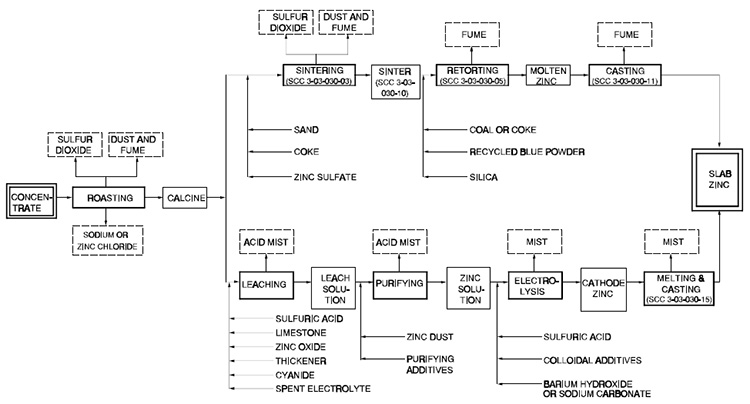 Zinc blende is heated in air to get rid of the Sulfur and to convert it into ZnO which is more reactive. This way, it will be easier to obtain the zinc metal.

Reaction when Zinc Blende is heated in the air:

(a) The Hydrometallurgical Process

90% of zinc is produced using this process. The zinc oxide is separated from the other calcines using sulfuric acid.

The zinc is dissolves leaving iron or lead or silver precipitates which are removed.

The purified solution is then electrolyzed into high-grade zinc.

The sulfuric acid regenerated is recycled to the leaching step.

(b) The Pyrometallurgical Process

The Zinc Oxide is then mixed with crushed coke (carbon) and heated at 1673 K in fire clay retorts (Belgian Process) when ZnO gets reduced to metallic zinc. In this reaction, carbon acts as the reducing agent as Zinc's oxidation state is reduced from +2 to 0 and carbon itself is reduced.

Reaction when Zinc Oxide is heated in fire clay retorts:

Being volatile at this temperature, the metal distils over and is condensed leaving behind Cd, Pb and Fe as impurities. The crude metal is called spelter. This metal may be purified either by electrolysis or by fractional distillation.

• Approximately 30% of all zinc produced is from recycled sources.

• The total amount of zinc scrap is rising around world and is estimated at about 3 million tonnes.

• Either of the two zinc production and refining stages outweigh the mining and mineral processing.

• Unwanted by-products from zinc production include sodium oxide (corrosive and violent when exposed to water) and carbon monoxide (toxic to humans and animals as well as ozone-forming) and carbon dioxide.

• The production of zinc produces around 3 tonnes of CO2 per tonne of zinc.

• Zinc occurs naturally throughout the environment, but concentrations are rising unnaturally.

• Smelter slag and other residues of process also contain significant amounts of heavy metals. These heavy metals. Water is polluted by these heavy metals. This results in some fish accumulating zinc in their bodies, when they live in zinc-contaminated waterways. When zinc enters the bodies of these fish, it bio magnifies up the food chain.

• About 1.1 million tonnes of metallic zinc and 130 thousand tonnes of lead were mined and smelted in the Belgian towns of La Calamine and Plombières between 1806 and 1882.[92] The dumps of the past mining operations leach significant amounts of zinc and cadmium, and, as a result, the sediments of the Geul River contain significant amounts of heavy metals. (Wikipedia)

• Zinc is an essential element contributing to human health. However very large concentrations will cause health problems.

• In the work place environment zinc contagion can lead to a flu-like condition known as metal fever. This condition will pass after two days and is caused by over sensitivity.

• Zinc can be a danger to unborn and newborn children. When their mothers have absorbed large concentrations of zinc the children may be exposed to it through blood or milk of their mothers.

The aftermath of zinc pollution in Aquashicola, Pennsylvania, USA 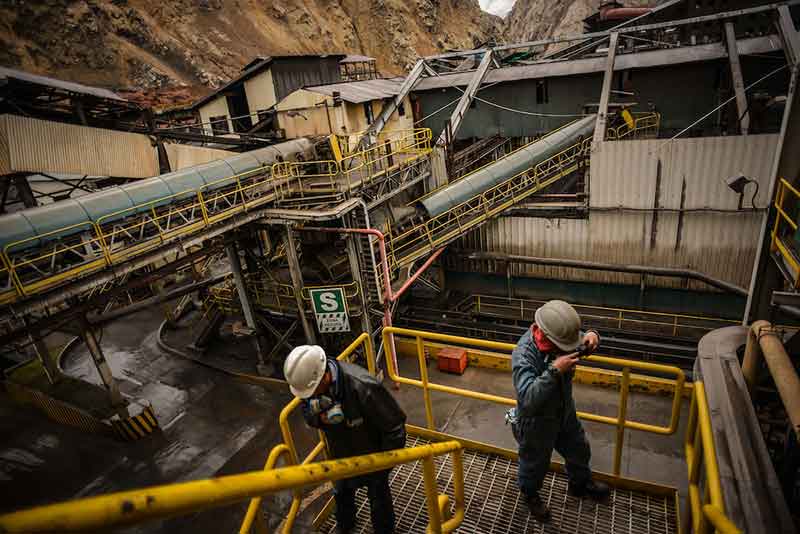