At ground floor level, solid floors of compacted earth predominated throughout the world until relatively recently and they remain common in many poorer countries, particularly in rural areas. To prevent dusting a variety of coverings have been used, the most basic being loose rushes or an application of drying oil such as linseed to consolidate the surface. For a more durable surface, floors have been finished with embedded stones, tiles, bricks and mosaics. These could be laid directly onto the earth flooring, or bedded on sand, often over rubble hardcore.

In 13th century England, glazed clay floor tiles started to appear, bedded in lime mortar. Brick floors appeared in the following century and were normally used for passageways, sculleries and outbuildings. Some traditional solid floor materials tend to allow the passage of moisture vapour from the ground through them, whereas slate and some other impervious stones might allow it only via joints.

Due to their density and low thermal conductivity, earth floors which are dry are thermally efficient, capable of absorbing heat and releasing it gradually over time – the thermal 'flywheel' effect. English Heritage, in its guidance note Energy Efficiency and Historic Buildings: Insulating solid ground floors, observes that 'the ground itself maintains a surprisingly stable temperature of around 10°C".

For these reasons, earth floors are among the most sustainable forms of flooring, and there has been a revival of this type of floor construction for domestic situations in the West by the environmentallyconscious. However, from a commercial perspective, laying an earth floor is extremely labour-intensive and time- consuming, and has long-term maintenance implications. Earth floors do not always tolerate load points and in damp climates like the UK, managing groundwater is an issue.

An alternative to earth floors was the use of lime or gypsum. The Romans created a form of cement based on slaked lime mixed with volcanic ash and an aggregate which included crushed brick. The ash had a pozzolanic effect, enabling the lime mix to achieve a hydraulic set before the mortar had fully dried out, while the brick particles helped it to dry and may also have contributed to the hydraulic properties too. (A hydraulic set is one which is not dependant on the presence of carbon dioxide, and in a damp floor this can be important.) Although much softer than the ordinary Portland cement used today (OPC), this cement was surprisingly durable and was used for a range of building purposes, not just floors.

Although Roman cements ceased to be widely used after the fall of the Roman Empire, lime-ash floors – which came into existence perhaps around the 14th century – bear a close resemblance. They comprise slaked lime and wood ash from lime-burning kilns, together with aggregates and often gypsum. These floors hardened to such an extent that the material is sometimes mistaken for concrete. Lime-ash floors are found at ground level and at first floor level, often supported on a layer of reeds over the joists and hidden from below by plaster and lath ceilings. Cotehele House in Calstock, Cornwall, a Grade I listed mansion (built c1300 with later phases of alteration), has an impressive lime-ash floor dating from 1520.

Suspended timber floors appeared in the UK in the early 18th century. Air flow was maintained between the ground and the timbers above by vents in the external walls, to ensure that the air did not become too damp. Like the majority of traditional building materials and techniques, a traditionally constructed solid floor is 'breathable', allowing any moisture present in the floor to evaporate into the air.

Provided that the ground is adequately drained, and the room above is adequately ventilated, a permeable ground floor can allow equilibrium to be reached between the ground and the air above, reducing the chances of concentrated damp areas and potential deterioration of the building's fabric.

Until the early 20th century, most floors were vapour permeable to some extent. This changed with the advent of Ordinary Portland Cement, which became widely available in the interwar period and is relatively impermeable. Furthermore, damp-proof membranes (DPMs) were introduced at the same time, enabling floor slabs to be created that were water-tight. Later it became standard practice to include a layer of insulation under the concrete slab too.

This approach is designed to work with a building of modern design and construction which incorporates a damp proof course in the walls. It will only work well in a traditionally constructed solid wall building if the groundwater is minimal but all too often the capillary effect of the substrate draws groundwater to the underside of the floor slab where it accumulates. The surrounding footings, however, remain porous and act like a wick, drawing the water up. This can lead to excess moisture at the junction of the wall and floor, and mineral salts can be drawn into the structure. This excess moisture can cause simple discolouration, failure of decoration or plaster or degradation of structural timbers or earth walls. Salt crystallisation in particular can be highly damaging to some types of masonry.

The fundamental issue facing the owners of older properties is how to bring them up to modern standards with regard to heating, insulation, airtightness and freedom from damp. Homes and workplaces need to be functional spaces where people can live and work comfortably. Increasingly, they also need to be energy efficient, satisfying the ever-growing demand for carbon reduction while retaining their distinctive character.

Today's Building Regulations require the solid floors of most buildings to have high levels of insulation and high compressive strength as well as impermeable barriers to prevent moisture migrating through the floor into the room. The Building Regulations are absolute for new dwellings and are the goal for existing traditional buildings, but the regulations can be a little more flexible for old buildings if there are good reasons not to conform.

Where a new floor slab is to be created, one option is to use a slab based on lime ('limecrete') which is breathable, rather than OPC, which is virtually impermeable. A limecrete floor can be designed to meet modern insulation requirements and can incorporate under-floor heating (UFH). It may be possible in some cases to re-lay the original surface on top of the new slab if desired, although this can be difficult to achieve successfully and requires a methodical approach if the character of the floor is not to be altered.

Preventing ground water penetration requires some form of capillary break. This can be achieved using an impermeable damp-proof membrane (DPM) as is common in the US and would usually include petro-chemical based insulation. An arguably better approach is to use recycled foam glass or expanded clay aggregate insulation as loose-lay insulation. Being made from re-cycled glass or clay, these are more durable and widely perceived to be more environmentally friendly than an insulation based on petro-chemicals. Furthermore, due mainly to the open pore structure of these aggregates, they have low capillary attraction to moisture.

The installation is as follows: the ground is first excavated and levelled - the greater the depth available, the better the insulation. A breathable geotextile membrane is laid and the loose-lay insulation is added followed by another layer of geotextile membrane. The limecrete slab is then cast using a mix containing expanded clay aggregate or sand, and natural hydraulic lime. This is usually left for around three weeks before any UFH pipes are fitted and covered with a lime mortar screed.

Typically, expanded clay aggregate has a Lambda value of 0.1 w/mk (Lambda values refer to thermal conductivity, measured in watts per square metre of surface area: the lower the value, the better the thermal efficiency). A slightly more expensive option is foamed glass which has a Lambda value of around 0.075-0.08 W m K so is around 20 per cent more thermally efficient and more structurally stable as it requires compaction. 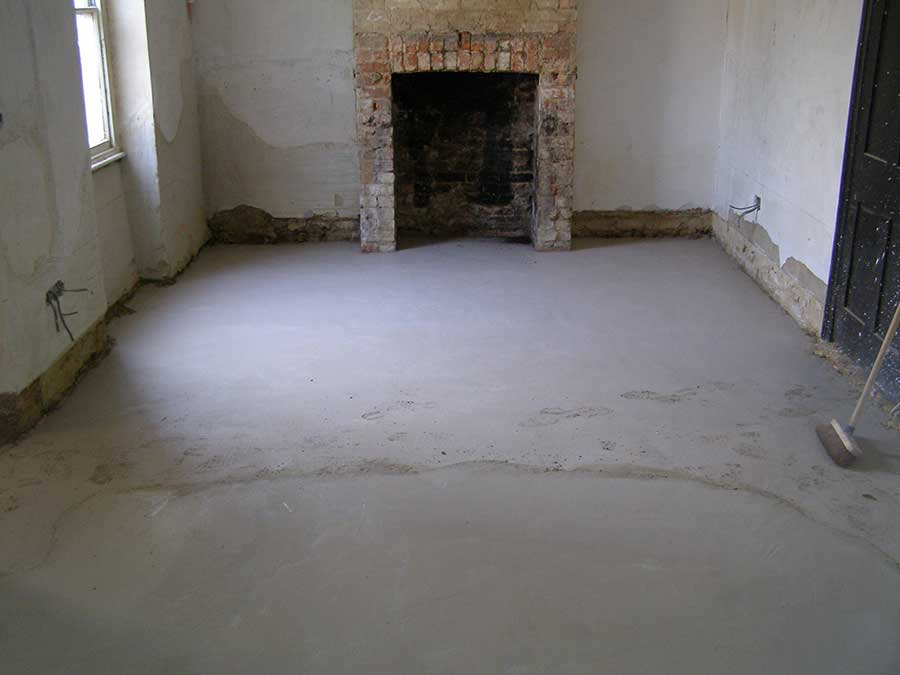 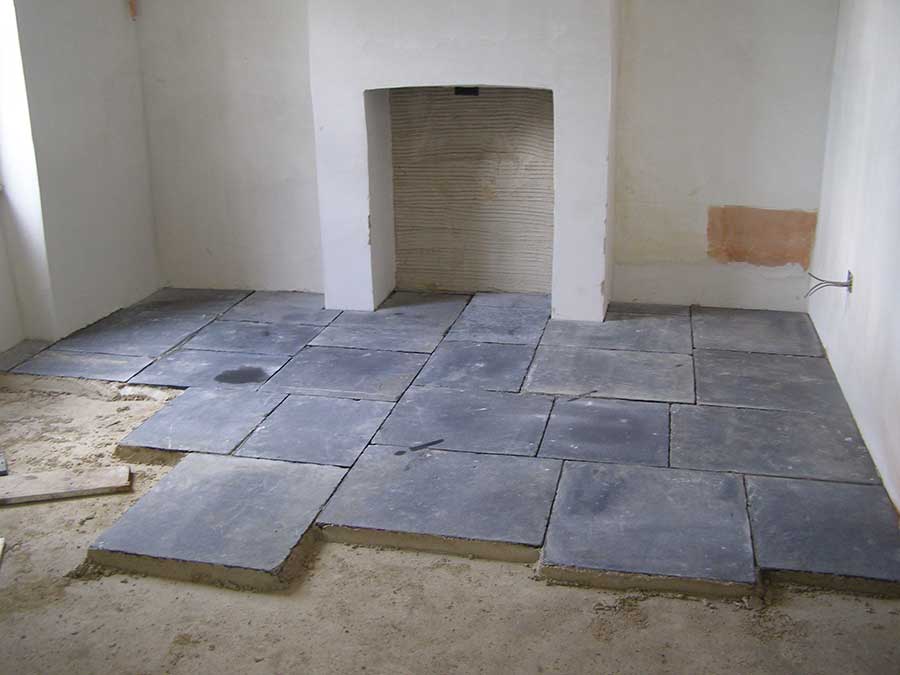 Selecting the best option for your building

Each building will present specific problems related to age, construction, terrain etc. There are a variety of options available to specifiers of solid floors in traditional buildings. Some options work better than others and some might cause irreversible damage or loss of historic fabric. It is important to appraise the individual building and make an informed decision on which build-up is most appropriate.

Whether a new floor slab is to be constructed or a traditional earth floor is to be retained, damp problems must be dealt with first, and there are a number of other key issues to be considered before deciding on the best solution:

Can the floor be repaired rather than excavated?
The greatest danger associated with limecrete floors is the potential need to excavate to a greater depth than the foundations. This can destabilise the building, so great care should be taken to establish how deep the foundations are before any new floor is considered. Two or three test pits by the walls could be dug to allow a plan to be formulated.

Is the building in a Radon area?
It is very likely that a DPM will have to be included if Radon is present. The introduction of loose-lay insulation will be beneficial nevertheless.

How should the floor be finished?
Having created a breathable insulated floor, it's important to avoid an impermeable covering if possible eg glazed ceramic tiles, cementitious adhesives and grouting, rubber carpet underlay.

Is the building listed or is the floor of architectural/ historic interest?
Always check to see whether the building is listed and apply for listed building consent if required. Even if it isn't, removing or disturbing an original feature can damage the character and historic record of a building as well as its financial value. As William Morris, the founder of the Society for the Protection of Ancient Buildings, said: 'We are only trustees for those that come after us'.