In an ideal world, there'd probably only be one White - then at least the architects would be happy. But we live in relativistic times and White is no exception. There are 'Warm Whites' and there are 'Cool Whites' and 'Daylight Whites'. Somewhere in there there's a 'Neutral White', though that doesn't count for much because all these tones of White carry equal weight when it comes to combining Light and Colour. What we're talking about here is Colour temperature and its very important. 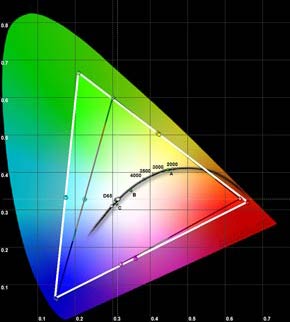 Sitting at the heart of the CIE Chromaticity Diagram is a simple curving line. This line represents the most important piece of information in the entire field of lighting design. The posh name for the line is the Planckian Locus (from Planck's Radiation Law: Max Planck - look him up on Wikipedia if you have to), though most of us know it as the Black Body Curve. The romantic version of the story is that if you take an iron cannonball and put it into a furnace, the colour of the 'black' ball will change as it gets hotter. First it glows Red, then up through Yellow and into White (White Heat - a great film). But then, if it were possible to carry on heating the ball without it melting completely away, the colour would carry on out of White and into the Blue. And if you plot the colour change together with its applied temperature, that's your Planckian Locus - thanks, Max.

So far, so abstract, but it turns out that this 'White' curve also applies to what we might call 'natural' Whites, running from the Yellow-White of candle light (around 2000K) to the brilliant Blue-White of a summer sky (high up there at above 8000K). And now I need to introduce you to a Dutch researcher, A.A. Kruithof who, in 1941, performed evaluation tests on tones of White at varying luminous intensities - with unsurprising results. He asked observers for their opinions on what felt 'right' when seeing 'White' at different levels of brightness. The practical upshot of this is that we like Yellow -Whites at low brightness levels and Blue-Whites at high brightness levels. Hmmmm. 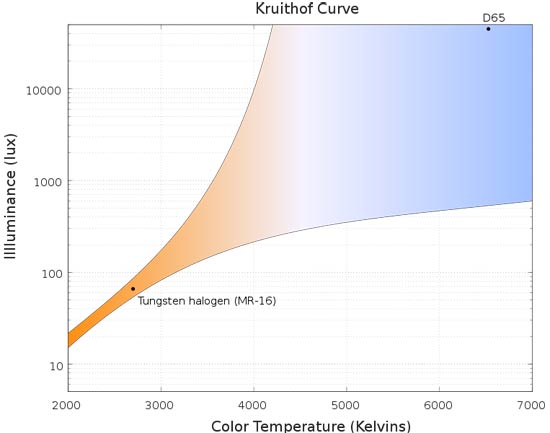 The mid-point in Kruithof's findings was around about 3700K, which was given the OK at around 500 Lux. We should not be surprised, therefore, to find that we consider 3000K to be 'Warm White' and 4000K 'Cool White', the two most popular colour temperatures for commercial lighting.

When it comes to selecting our light sources, it used to be easy. A filament lamp sits perfectly on the Planckian Locus, and room brightness was fairly limited to how much light people could afford. (And given that incandescent electric light was so much better than the alternative - who was complaining?) But the introduction of fluorescent lighting was a different thing entirely. If the incandescent lamp was essentially capturing fire in a glass bulb, then the fluorescent tube was containing lightning inside a tube.

Low energy lighting: Getting it White

The way that White light is made in a fluorescent lamp is that it phosphor coatings on the inside of the glass tube glows as a result of the discharge arc that's created inside the tube when the lamp is switched on. The Whiteness of the light depends upon the mixture of the phosphor soup. And the first lamps, known as Halophosphate tubes, were not good.

Once the initial amazement had died away that such a thing was possible, people started to complain about the poor colour quality of the fluorescent tube. The scientists took a good look into the phosphor soup and, eventually, in the early 1970's, the much-improved Tri-Phosphor lamp - with three times as many ingredients - was born.

(an aside: It's still possible to buy Halophosphate lamps, because some manufacturers still insist on making them. The Halophosphate lamp has no good reason to exist other than its cheap - and nasty. The very minimum colour specification for any fluorescent lamp should be that it is employs Tri-Phosphor technology. Shame on you, lamp makers!)

No fluorescent lamp produces White light that sits on the Planckian Locus. For this kind of White, a new term had to be created - Correlated Colour Temperature. It sounds good, and sometimes it might even be good. Despite still producing some rubbish, it has long been the aim of the fluorescent light source manufacturers to produce lamps as close to the Planckian Locus as possible. Tri-Phosphor technology was a huge leap forward and increased the colour rendering properties of the fluorescent lamp from its thuggish forebears.

I thought we'd get away without involving our old friend Colour Rendering Index (CRI), but it was a vain hope.

Every White source that sits on the Plankian Locus is given a 100% colour rendering: a CRI of 100. The further from the Locus that the White light strays, the lower comes the CRI. For a comparison, modern UK street lighting uses high pressure sodium, which has a CRI of less than 25. Halophosphate lamps typically have a CRI somewhere around 65. The Tri-phosphor technology immediately improved the fluorescent CRI to over 80.

More recent fluorescent developments have brought us the Multi-Phosphor lamp, which have five or more phosphors in the soup. These have CRIs well into the 90s. In some quarters they are known as full-spectrum lamps and they perform astonishingly well. There's even a suspicion that these lamps defy the Kruithof findings, whereby even though the 'daylight' versions of these lamps may be very 'cool' in their colour temperature, they still perform satisfactorily at modern office lighting levels (300 Lux +)

LED lighting: Getting it White

And just when we thought it was safe to switch on the light, along comes something completely different. But before we get into what's been wrong with LED lighting, a touch of historical perspective. Bad colour rendering first came along with the first commercial fluorescent tube, by General Electric in the USA, and that was only in 1938. That problem was more or less sorted by the 1970's with the introduction of Tri-phosphor technology. Now, a further thirty-odd years down the track we have another piece of new amazing, science that, unsurprisingly, needed to have a few corners knocked off it before it became a real contender in the White light stakes.

There are some materials that act very strangely when you apply an electric charge to them, and semi-conductors that produce light is as weird as you'd like. LEDs - like fluorescent lamps - do not produce White light without a bit more effort on our part, and that generally means having to apply some form of phosphor coating around the 'chip'. Again with the phosphors, then.

LEDs have got a bad press for the quality of their White light for a few reasons:

2. Millions of White chips are produced every day and there can be a huge disparity between the white of one chip and the White of another. This problem has come to be referred to as the 'binning' process, where the assembly-line output is separated into bins of equally performing chips.

3. There is no industry standard for the production of White LEDs and its not really possible to guarantee the Whiteness of different manufacturers.

4. An issue that's building to some kind of crisis is the claim that LEDs have an extraordinarily long lamp life. LED colour output deteriorates over time, which is fine provided that all of the chips are ageing at the same rate. But when a chip/lamp fails and has to be replaced, it is highly likely that the replacement piece will not have the same colour quality as the original installation. This will be a problem with linear lighting details, where a uniform washlight effect is created using many metres of LED strips.

After speaking to a number of LED manufacturers it appears that there is support for a more rigorous testing procedure for LED chips.

a. The colour rendering issue can be resolved by extending the CRI test. Conventional testing (of fluorescent sources and other discharge lamps) uses an 8-colour point reference system to assess colour accuracy. This has been shown to be unreliable for LEDs, which need a 9-point - or possibly even a 15-point system of measurement.

b. Colour Point Consistency needs to be tightened. This is all about reducing the acceptable tolerances in colour deviation between chips. There is stuff called the MacAdam Ellipse and SDCM (Standard Deviation of Colour Matching) that are used in this kind of assessment - and I certainly don't intend to get into the details of those here, suffice to say that elements within the LED industry are calling for a maximum of 2-3 SDCM/MacAdam steps, which is described as 'hardly any colour difference visible'

c. Binning practices need to be standardised across the industry, especially as we are seeing a burgeoning replacement lamp sector and we can easily imagine LED lamps from one source being installed alongside another.

Where are we at the moment? Not close enough to what's been written here, but we can only hope that the spirit is sufficiently willing, industry-wide, for a mutual resolution to these issues.