Wet walls are cold walls. Up to 40 per cent more heat is lost through a damp wall than a dry one so solving damp problems is vital to energy efficiency but, before jumping in and attempting to deal with damp, it’s worth understanding what’s going on. Dampness in old buildings has many origins so diagnosing the true cause and tackling the problem at source, rather than simply treating the symptoms, is key.

In old buildings, damp is often caused by the use of inappropriate modern materials and the subsequent inability of the historic fabric to ‘breathe’. Rising damp is the term routinely used when damp patches appear but, in reality, many damp problems relate to penetrating damp and increasingly, as we strive to thermally insulate buildings and make them more airtight, condensation.

Condensation on surfaces and the mould that results is frequently misdiagnosed. Condensation occurs when the water vapour in the air comes into contact with a cold surface and condenses, returning to a liquid. Water vapour is generated in any building through activities such as bathing, cooking and drying laundry. The more airtight the building, the fewer the number of air changes and the greater the relative humidity.

It’s worth noting that one particular type of mould is associated with condensation: Aspergillus niger. Appearing as a patch of small black spots, this mould prefers pure condensed water so is a good indicator that the problem is condensation rather than other forms of dampness. The key step to solving condensation is the provision of controlled ventilation. This may be as simple as opening a window for a short period or might require the installation of mechanical ventilation in the form of an extractor fan or a whole house ventilation system.

Penetrating damp can also cause confusion because water sometimes tracks some distance through the fabric of a building from its original point of entry. It may be the result of building defects ranging from a missing roof tile or defective pointing to a rotten windowsill or leaking gutter or downpipe. High external ground levels, defective junctions between roofs and parapet walls and even plumbing leaks may also lead to penetrating damp; problems can be exacerbated by hard cement renders and pointing that traps the moisture.

Rising damp is often more complex. Many building continued to be built without damp-proof courses until well into the twentieth century but the breathability and natural equilibrium of the fabric kept moisture in check. Dampness may be the result of excessive natural ground water or because of a leaking drain or water pipe. Often it’s because modern interventions have changed the way the building works. For example, impermeable surfaces such as driveways or paths have been laid to butt up against the base of a wall or a concrete floor slab has been poured internally, trapping moisture and forcing it upwards through the only escape route: the walls. Again, dealing with the cause of the problem is generally the solution rather than injected damp proof courses or other modern ‘cures’. 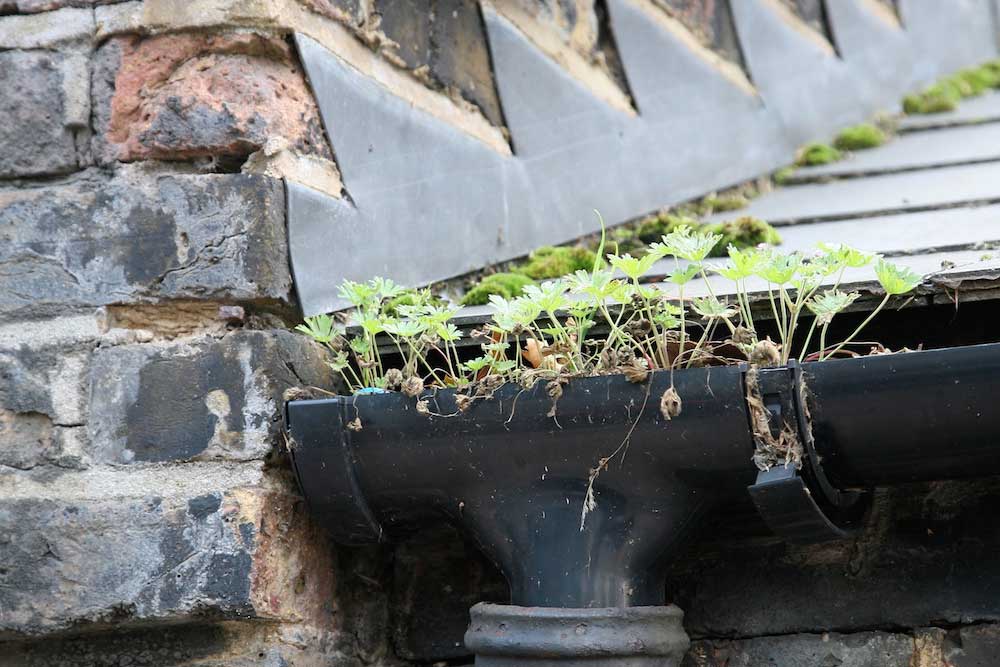 Blocked gutters and missing pointing will cause penetrating damp 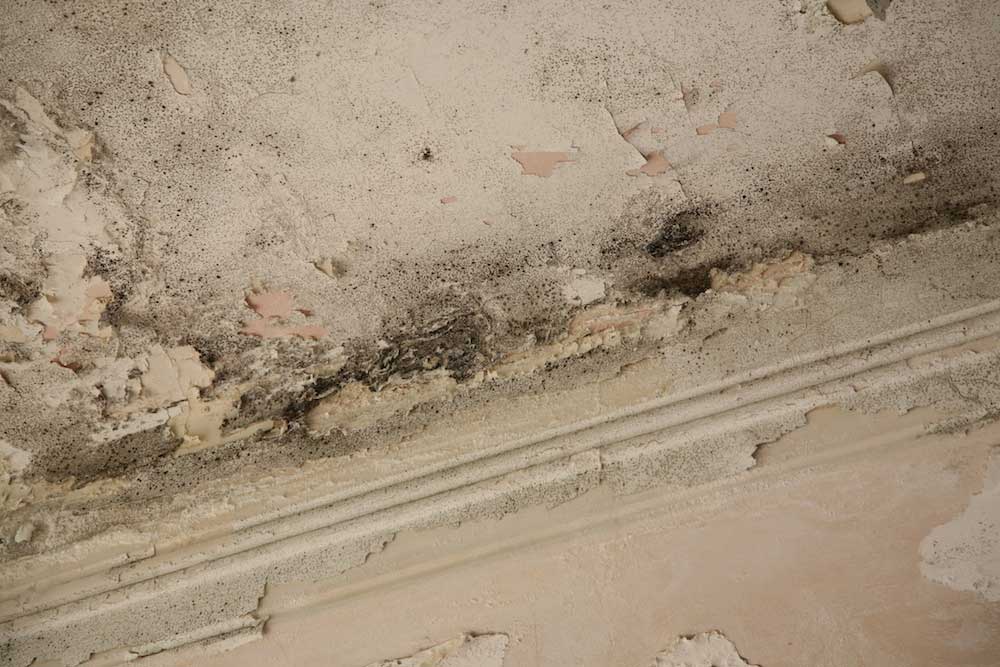 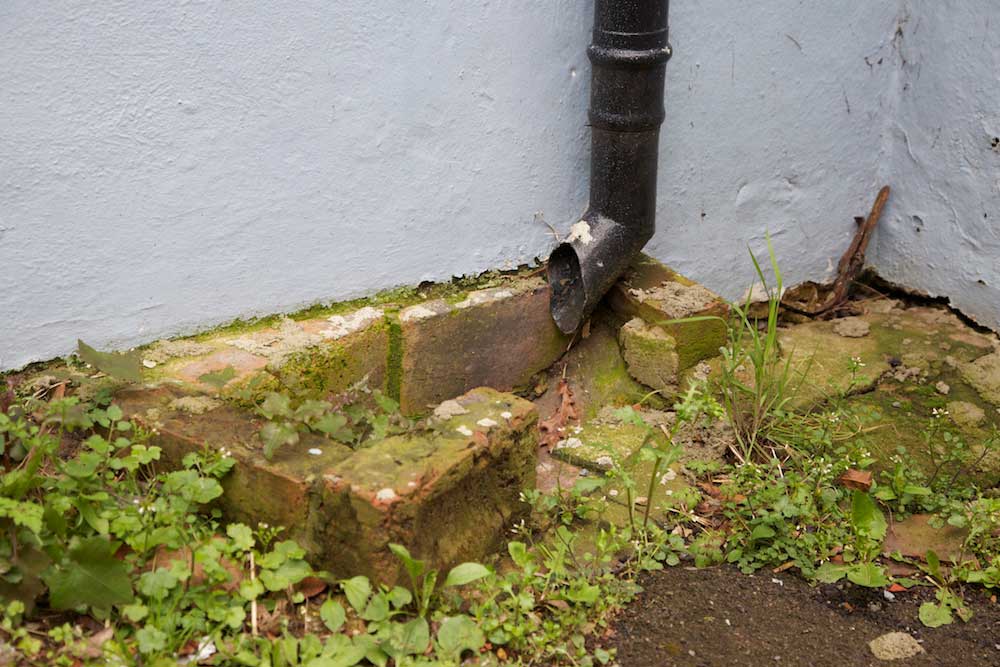 Hard surfaces butting up to walls can lead to rising damp 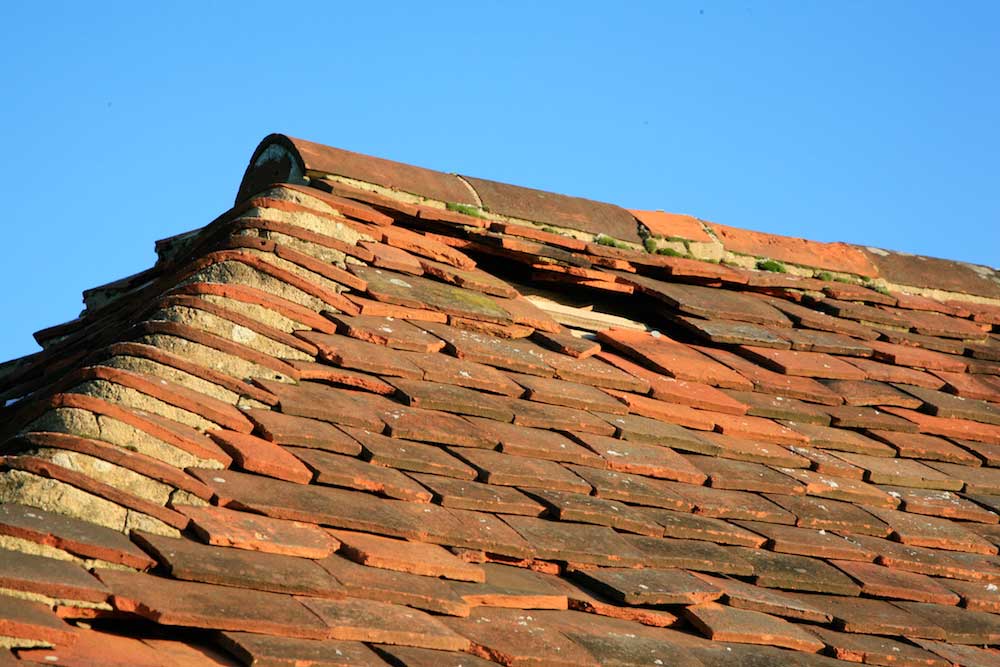 A few missing tiles may be the origin of penetrating damp