The commercial carpeting market is the scene for some of the fiercest competition in the construction products industry. In the search for an edge, the more agile manufacturers are reacting to prompts by specifiers and government agencies to produce carpet tiles that significantly reduce their environmental impact.

There are two main concerns – one is the potentially toxic emissions to air during the installed life of a tile, and the other is the quantity of used carpet treated as waste.

Toxins such as styrene, formaldehyde and xylene can be harmful at low levels, but improved detection technology, more stringent performance standards and new materials bring the prospect of a healthier working environment.

The amount of carpet waste we bury is staggering – it’s estimated that about 165,000 tonnes are sent to landfill in the UK annually, and worse still, much of it has not reached anywhere near the end of its working life.

The obvious solution is to re-use when possible – suitable tiles are collected from site, graded and sold back into the market. Sadly, progress in this sector has been disappointing - whilst feasible, in practice and without critical mass, choice is restricted and recovered quantities unpredictable. For refurbishment to work in the future, manufacturers need to become re-engaged and to commit greater resources.

In contrast, the recycling of carpet materials has been the subject of substantial capital investment. Ideally, at the end of its working life the tile can be returned to the manufacturer where its components can be disassembled and returned to the production stream to form new carpet – this ‘cradle to cradle’ concept is the most virtuous form of recycling.

Perhaps the most important consideration is to reduce the frequency of carpet changes. Carpets are changed for two main reasons – fashion and wear. Not a lot can be done about fashion, though clearly linking carpets with the design ethos of ‘de jour’ is inviting instant obsolescence; but plenty can be done about wear. By specifying carpets that have durable qualities through their construction, their protection from soiling and their suitability to undergo cleaning regimes, the designer can go a long way in achieving the low impact goal.

Carpet tile construction varies greatly in materials and sustainability. Because of the high performance expectations, commercial wearing layers have traditionally been made using nylon, and only lately have alternatives begun to emerge. Though the most obvious, the wearing layer is usually surpassed by the backing layer in terms of environmental impact. Some manufacturers continue to use the earliest type bitumen formulas for backing materials, but most will use PVC which was developed to replace it – providing reduced weight, improved stability and ease of laying. PVC itself is becoming eclipsed by some manufacturers eager to reduce PVC’s impact – replacing it with arguably superior materials include PET and polyolefins.

Apart from selecting a durable carpet composed of materials with minimal environmental impact, the third most important aspect is considering what happens when the carpet reaches the end of its working life. The specifier should consider to what extent the carpet can be recycled. Some manufacturers build in a recycling programme (cradle to cradle), but most currently don’t. 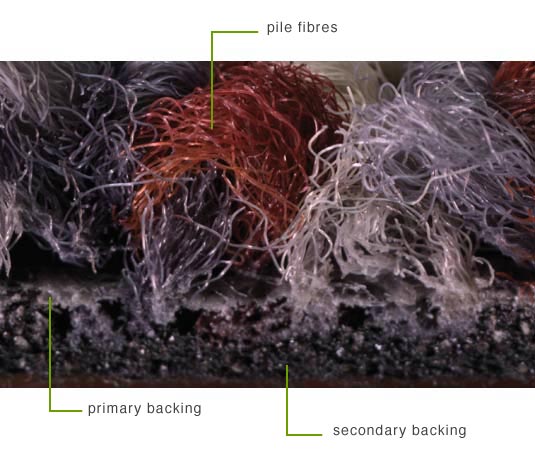 Nylon accounts for around two-thirds of the fibre used in carpets - mainly because of its durability, making it ideal for areas of high traffic. Nylon fibre is produced in two forms: Nylon 6 is the cheaper of the two, but can now match its rival’s performance. The big advantage of Nylon 6 is that it is much easier to recycle; Nylon 6.6 has a higher performance rating than Nylon 6 but it may not be enough to make a difference in selection.It is worth noting that although all nylon is easy to dye, the preferred process in terms of longevity of colouring is ‘solution dyeing’ (see ‘dyeing’ below)

Some fibres include recycled contents

Though wool is used in the manufacture of commercial carpet tiles, its use is usually restricted, because of its relative lack of durability, to areas of low traffic. It is not unusual to find pile of 100% wool, but most manufacturers prefer to add nylon (20%) to enhance the wearing qualities.

Wool comes in different grades where quality is determined by the length of pile, and the density of the yarn and tufts. New Zealand wool tends to be softer than British wool.

Wool is distinguished because it is the most well-known ‘natural’ pile fibre used in carpet tiles – though other fibres such as goat hair are also used in a small number of cases.

Some concern about methane from sheep

Not suitable for commercial areas of high traffic

Some concern about potential for trapping VOCs

Can shrink when saturated with water

After nylon, polypropylene is the most popular pile yarn. Though possessed of wearing qualities, it is not quite as robust as nylon – which tends to limit its use to some offices, but not for areas of heavy foot traffic such as airports or retail outlets

Resistant to water based stains, mildew, pilling and electrostatic build-up

Poorer texture and feel than wool or nylon

Can look dingy when soiled

PET is polyethylene terephthalate, which is one of a number of fibres known commonly as polyester. High quality PET material is commonly sourced from the recycling of plastic bottles. Polyester are good for stains and bright and vibrant colours can be had, but they should not be used in areas of heavy foot traffic.

Poor resistance to abrasion - unsuitable for some commercial installations

A recent research paper presented evidence that PET may yield endocrine disruptors under conditions of common use, though the yield mechanism has not yet been established. The implication for carpeting is as yet unknown. (Environmental Health Perspectives

Bio-based polymer fibres are an important development because their sourcing from plant materials rather than petro-chemicals. It is early days yet, but several of the major carpet manufacturers are investing into research and development. The highest profile bio-based fibre is PLA (Poly Lactic Acid) which is derived from cornstarch, sugar beet or wheat starch. The resulting fibres resemble those of polyester, but, to date, there still appear to be durability issues in bringing PLA to the market as a pile fibre. Some think that it might prove to be better suited as a backing material.

Yarn is tufted into the primary backing which is typically a non-woven polyester material, light in weight and of low environmental impact.

The binder that adheres the primary to the secondary backing is usually SBR (Styrene Butadiene Rubber), a synthetic latex compounded with chalk. The average tile contains around 1kg of binder and, in new carpets, the SBR is responsible for much of the characteristic ‘new carpet’ odour. Though there are no concerns of toxicity in use, the production of SBR was as long ago in 1976 associated with a higher incidence of leukaemia and other malignancies among workers. (Epidemiologic investigations of styrene-butadiene rubber production and reinforced plastics production; Scandinavian journal of work, environment & health, 01/02/1978) see also (www.cdc.gov/niosh/84105_41.html)

Bitumen is the traditional form of commercial carpet backing. Natural bitumen derives from the oil sands of Alberta, Canada, which is often mixed in carpets with synthetic bitumen, a bi-product of crude oil distillation. Traditional problems associated with bitumen backings such as cracking and adhesion to sub-flooring have been addressed by the introduction of other materials such as fibreglass and polypropylene.

Bitumen tile waste has been estimated at 50 kilo tonnes – of which only a small amount is recovered and re-used. WRAP are working at ways of improving the figure including using recovered bitumen in road asphalt.

Synthetic bitumen is petro-chemical based

Most bitumen backing is still sent to landfill

PVC is the most common of carpet tile secondary backings. In the search for a material that could avoid the very visceral problems experienced with bitumen backing, PVC offered a lighter, more rigid and user-friendly alternative. However, with the continuing health concerns associated with PVC, some manufacturers have exited the PVC backing market and have adopted alternatives with what are hoped to be lesser impacts

Some backings are using recycled PVC, but environmental campaigners maintain that dangerous phthalates (eg DHEP) are 'kept in system' and people continue to be exposed to the risks.

Concerns expressed concerning additives and stabilisers ( though, mystifyingly, these are not shared by the BRE Green Guide)

PVC tile waste accounts for around 15 kilo tonnes annually, most of which is sent to landfill

Whilst common as a pile fibre material, polyolefin backing has only recently been developed – mainly as a result of the search for an alternative to PVC, but also because it offers less weight for the same or better performance.

Another attraction is the ease with which Polyolefin can be integrated into closed-loop recycling schemes – backings do no damage to nylon pile and the polyolefin can be ground down to be blended with new backings.

Can be easily recycled

PVB is a non-chlorinated vinyl, one of vinyls now being used as a direct substitute for PVC (chlorine is the source of many of the environmental health concerns with PVC). Post-consumer PVB obtained as waste from car windscreens is now beginning to be incorporated in carpet backing.

A robust replacement for PVC

Unlike PVC, it does not need phthalates

Lacking the necessary rigidity, Urethane is little-used in the commercial carpet market. It is sometimes used as an extra backing layer to improve acoustic performance. Urethane is generally a petrochemical derivative, but recent developments have included polyols, such as soya beans, as a source

Adhesives are capable of being more toxic than the carpet they are made to adhere. Most adhesives are still based on SBR synthetic latex (see ‘Binding layer’ above) which emits VOCs. However, newer products are water-based and contain less than 5% organic compounds. VOC emissions associated with newer products are listed as less than 0.05% after 72 hours. The designer is advised to check the adhesives safety data sheet before specifying.

• Recovery of product and recycling of constituents requires significant capital investment by carpet manufacturers in plant, processes and logistics.
• The pile requires mechanical separation from the backing
• The materials resulting from the recovery process can reduce standards of new carpet components through dyeing and abrasion resistance.
• The 'gold standard' is the 'closed loop' recycling where materials can be used over and over.

- Complex and intensive process, relatively few facilities in the world that can do it

- Check that infrastructure is already in place

• An alternative to recycling, downcycling into other products.