Though history records the use of concrete blocks by the Romans, Greeks and even Egyptians (some of the two-tonne blocks that make up the Pyramids are believed to be a primitive form of concrete), modern-type blocks were first cast, albeit in modest quantities, in around the middle of the nineteenth century. In 1827, Joseph Aspidin devised the basic mix that we would still recognise today. The mix, cast in wooden moulds, consisted of powdered limestone and clay mixed with water.

In the early twentieth century block manufacturing became an established industry. The earliest blocks manufactured in the UK were made using cement mixed with locally available aggregates – often waste products of industrial processes such as breeze (cinders retrieved from gasworks and coke ovens – from the French ‘braise’ meaning ‘hot coals’) and clinker (blast furnace slag).

These early lightweight blocks were popular as internal partition walls because of their ease-of-use and cheapness, but it was only as a result of the development of cavity walls and the advent of mass housing programmes of the post-war years that the industry dramatically expanded.

Cavity walling became adopted in the 1920s (led by house-builders Costains) because, although slightly more expensive to build, the perceived advantage was that the technique successfully overcame the problem of water penetration that traditionally plagued solid masonry wall construction. Early cavity walls used brick in both leaves, but as the economics of using a cheaper substitute became apparent, concrete block largely replaced brick as the inner leaf from the 1950s onwards.

Today, the immense versatility of concrete blocks is demonstrated in their use throughout a building from its foundation walls, through cavity walls, monolithic walls, partition walls, separating walls and as a component of ‘beam and block’ flooring. Concrete blocks’ advantageous properties are reflected in their myriad of variations of strength, insulating and sound-reducing properties.

In use from the 1940s onwards, dense aggregate blocks are very much the work-horse of the construction industry. Their distinctive properties of durability and strength make them an ideal and cost-effect solution for all types of load-bearing walls. Dense aggregate concrete blocks are manufactured from cement, sand and aggregates.

Reusable, particularly where lime mortars have been used

Produced in greater volume, but less strong than dense blocks, lightweight blocks are used in both internal and external walls where loading is slightly more restricted or as infill blocks in beam and block flooring. Their main advantage over dense aggregate blocks comes from a combination of higher insulating properties and a lighter unit weight. The lighter block enables time and material cost savings through easier handling and larger units. Units the same size as other block types.

Lightweight blocks are manufactured from cement together with one of a variety of natural or man-made expanded aggregates including: granulated / foamed blast-furnace slag, expanded clay or shale, furnace bottom ash (FBA), pulverised fuel ash (PFA), or the less common pumice (a volcanic material) . The density of the aggregate is generally proportional to the strength of the block - so for example ‘super-lightweight’ aggregates such as expanded clay and pumice used for their excellent thermal performance, feature a relatively low compressive strength.

Makes use of secondary aggregates

Reusable, particularly where lime mortar has been used

Use of virgin clay causes land degradation and resource depletion

High embodied energy involved in the production of some aggregates

First produced in Sweden in 1923 and used in the UK since the 1960s (when they were known as ‘cellular’ or ‘gas’ concrete blocks), aerated concrete or ‘aircrete’ blocks are the lightest of the family of concrete blocks. Aerated blocks are distinguished by their capacity to perform a dual structural / insulation function. Though limited to structural applications in low-rise construction and partitions as well as a component of curtain walling in higher buildings, aerated blocks can perform a similar range of functions as dense and lightweight blocks. The blocks are made from cement, lime, sand, pulverised fuel ash (PFA) and water. PFA is mixed with sand and water to form a slurry. This is then heated before being mixed with cement, lime and a small amount of aluminium sulphate powder. The aluminium reacts with the lime to form bubbles of hydrogen. As the mixture expands into a ‘cake’ the hydrogen is diffused and replaced by air. When the mixture is partially set, it is cut to block size and transferred to an autoclave where it is high pressure steam-cured to develop strength.

Based on volume, aerated blocks contain around 25% less embodied energy than other concrete blocks

Reusable if dismantled carefully, particularly if lime mortar has been used

Use of aluminium adds embodied carbon

The environmental impact of concrete blocks

The major environmental impact caused in the manufacturing of concrete blocks derives from the use of cement. The manufacture of cement is responsible for between 5 – 7% (depending on source) of the world’s carbon dioxide emissions. 40% of the total cement emissions are due to the use of fossil fuels (usually coal) to heat the cement kilns to 1500°C and the remaining 60% is from the transformation of limestone at high temperatures (‘decarbonation’).

Most aggregates derive from land-based sources, though approximately 20% of sand and gravel is dredged from the seabed. The quarrying, processing and transportation of land aggregates contributes to the depletion of resources, degradation of the landscape and the consumption of water and energy. Marine extraction continues to provoke debate over the long-term effect of offshore dredging, particularly on coastal erosion, fisheries and other marine life. 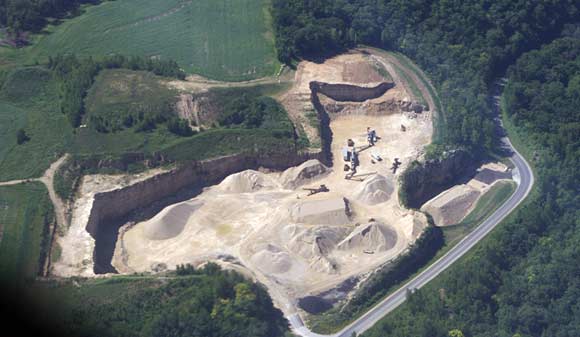 • The most effective alternative to cement is ground granulated blast furnace slag (GGBS), which can typically replace up to 50% of Portland cement in a concrete mix.

• Pulverised fuel ash (PFA) is now routinely used as a cement substitute – 15% being the optimum in maintaining the compressive strength of aggregate blocks and 50% in aerated blocks.

Products are available on the market that incorporate recycled aggregate to replace virgin quarried aggregate. Driven in part by the Aggregates Levy, introduced in 2002 to reduce the environmental impact of quarrying, the concrete industry is looking instead to utilising some of the 30m tonnes per year of construction and demolition wastes (C&DW) produced in the UK. A specific type of RA is recycled concrete aggregate (RCA), the performance of which is superior to recycled aggregates generally and enables replacement of up 20% of virgin aggregates in concrete.

Secondary aggregates are the by-products of other extraction or industrial operations. Secondary aggregates, including such like as colliery spoil, china clay waste, foundry sands and blast furnace slags, when used in concrete, reduce the demand on natural aggregates whilst simultaneously diverting significant quantities of waste from landfill.

Honeycomb clay blocks (often known as ‘Ziegel’) have been a common component of wall construction in Europe for many years. The blocks can be used both as the inner leaf in cavity walls or as a single skin for external load-bearing construction. As well as their use in walls, clay honeycomb blocks can be used in many of the same applications as concrete blocks. The blocks are formed with a cellular structure of vertical perforations that reduces the material quantity as well as weight whilst providing an increased thermal performance. Blocks are assembled through dry vertical interlocking and thin-mortar horizontal jointing.

Reusable if dismantled carefully, particularly if lime mortar has been used

Laying method might be unfamiliar to most block layers

Block dimensions are not UK modular

Vulnerable to damage from following-on trades

Doesn’t allow for use with standard steel and concrete lintels

Hemp blocks, although new to the market, are based upon a cast or spray-on technology that has been available for several years. The blocks are supplied in either load-bearing or non-load-bearing formats. Hemp blocks are manufactured using hemp blended with a lime and cement binder. Because of the bio-composite nature of the material, hemp block’s unique environmental benefit is the carbon sequestration that can be offset against other areas of a building’s construction.

Hemp is a renewable material

‘Carbon negative’ through sequestration of CO2 during plant growth

Use of aluminium in the binder adds to embodied energy

Blocks manufactured from unfired clay are still uncommon in modern construction – this is despite their excellent environmental credentials. Though limited to non-load-bearing applications, unfired clay blocks are suitable for internal partitions and infill to framed construction.

Can be used to stabilise internal humidity

Can be used to stabilise internal humidity

The insulated concrete form blocks consist of moulded cement-bound recycled wood chip. The blocks interlock to create the formwork for walls. Poured concrete around steel reinforcing inside the block cavities stabilizes the wall structure. An integral slab of mineral wool provides additional insulation. Used as the basis for a single skin wall, the main advantage of using formwork blocks is the speed of construction combined with a potential to gain high thermal performance.